This is the last post for this week mainly because I want it to stay at the top of the page. I’ll be in Atlanta Saturday for The Metroplex/688 Reunion show at The Masquerade. But let’s back up…

In the mid-1980’s I had just moved to Georgia and by sheer stroke of luck had stumbled onto the fact that Atlanta had a healthy local music scene. This was before I really knew all the distinctions between what constituted “cool” and “not cool” so I eagerly snatched up

recordings by nearly any local band I could. (And, yeah, I wish to God I still had my copy of that first Mr. Crowe’s Garden demo…).

Marietta, GA was a pit in the 1980’s. These days, it’s a very wealthy pit, but still pretty much a cultural wasteland (the inspiration to future generations given by Deerhunter, et al notwithstanding). Nope, Atlanta was where stuff happened and with the aid of a road map (remember, this is pre-Internet), friends who drove and a lot coordination, I would make my way into the city and see pretty much any band I could. Unfortunately, I was only able to make it to 688 a few times because the club closed down in the middle of my sophomore year in high school (and a lot of shows were 18+ and I was a very young looking 15). But The Metroplex played host to many good memories and, really, going to shows there ushered me into the world of punk rock and I’ve not recovered much from that initial immersion.

This isn’t to say (at all) that kids don’t still rebel against their parents via blue hair and leather jackets but the fact remains you couldn’t find those types of cultural statements on the television and punk rock certainly wasn’t used to hawk products. (I do remember, however, that Lenox Square was a popular hangout for many in the Atlanta punk scene. Go figure. Also notice how times change.)

I was able to convince a few friends at different times to go to shows with me but even when they wouldn’t I would regularly head into downtown Atlanta and catch bands (even on school nights. My parents were very, very cool about stuff like this). The Metroplex would do these Wednesday night shows that were three bands for three bucks plus a can of food for charity. I saw many a long-forgotten local band on those nights (Shades of Shame or Sheer Thursday, anyone?) Sodas were served out of two-liter bottles and I never got up the courage to actually eat anything there.

One now-hilarious story is showing up for one of the first Metroplex Punk Fests in 1987 and taking them at their word that doors would open at 3 PM and the music would start at 3:30. Needless to say nothing at all happened until around 6 PM but I still got to see 76% Uncertain. (Another one, thrown to coincide with the 1988 Democratic national Convention in Atlanta, would be a financial blow to owner Paul Cornwell as Marietta Street was blocked of almost totally. I missed it , too, because I was all busy demonstrating at the convention against one thing or another with this bunch of undercover communists I used to know. Click here for a typical shot of that whole scene. The photo is of cops facing off with ACT UP demonstrators but this was pretty much the mood. Oh, yeah, Ron Paul appeared at The Metroplex for this event, too. But, I digress…) The Metroplex finally closed down due to various factors in December of 1988. Thereafter, some local Atlanta homeless people squatted it and the building burned down in early 1989. (Note: In the course of its life The Metroplex occupied two separate locations. One on Luckie Street and one on Marietta Street. Everything written here is in reference to the second one.)

Although several of the bands on Saturday nights bill I saw many times years ago there are a couple that I’m freaking out over because I never, ever got to see them. Specifically, The Brains and The Restraints (who still hold the distinction as Atlanta’s ‘first punk band’). If you click on any link in this post, click on that one.

So, yeah, fast forward to 2008 and I’m sitting here half-wondering if I’m really trading in on someone else’s memories. I mean, I was a kid in the 1980’s and never really thought of myself as being part of any “scene” until I moved to Athens. Most of my memories of both these places are combinations of teenage rebellion (which, in my case, is funny because my parents gave me a lot of room to express myself and were very understanding and cool) and the excitement over finding new bands. I wish I could say I had made friends during these shows but the fact is that I was pretty much in awe of the whole scene and wasn’t very good at meeting people. It wasn’t so much intimidation on their part but insecurity on mine. I guess, ultimately, most memories of anything are never reliant upon a single factor. But a trip through memory lane is still just that and all I can really say is that it’s not a good idea to spend too much time there. I’ll forever be thankful to both these places for opening up my young mind to exciting possibilities (and , perhaps, helping place me in a trajectory I’ve yet to reverse) but it’s also important to always know that the most exciting things are happening right now. They’re all around you and whether you need to dig out a road map, catch a ride with friends or scour your local liberal weekly to find them…they’re there.

Even so, don’t think for a second I won’t take this weekend as the perfect opportunity to replace my now-discarded Metroplex t-shirt. You can bet I will. The whole event is a benefit for the new Atlanta Music Museum which makes it well worth its $25 ($30 at the door) price tag.

Steve May (688) & Paul Cornwell (Metroplex) speak about the reunion. See poster above for full, updated schedule and times. 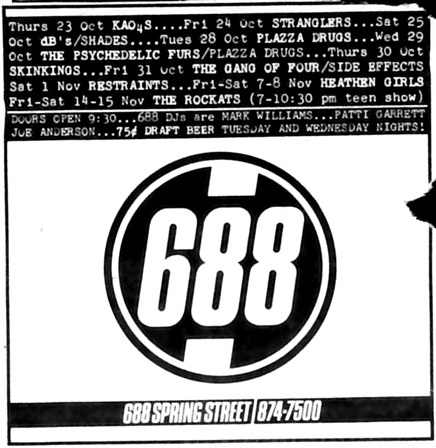