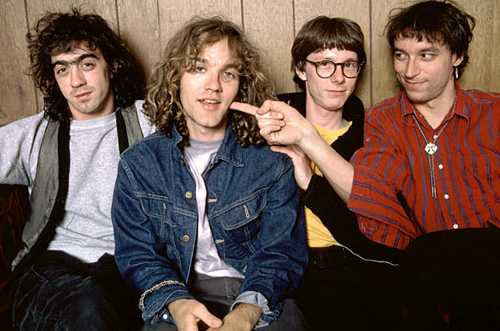 I spent most of this past week listening to the new “Deluxe” version of R.E.M.’s Reckoning preparing for an upcoming review/short feature for my paid writing gig. So far, I’m not feeling much different about the album than I always have (that is, it’s not as close to my heart as a couple of other R.E.M. records are/have been) but it has gotten me thinking about my history with R.E.M. quite a bit. There’d be no way to deny that it was R.E.M. that sealed my fate and put me on the path that caused me to make Athens my home for the past two decades. I wouldn’t want to deny it, anyway. And that’s a whole ‘nother story (which could take up thousands of words and that won’t happen today. But it will happen).

So, for now, dig these. Also, I threw some new MP3s down there at the bottom so enjoy.

MP3: The Pinx-Impatience
MP3: The Pinx-Change Me
(I dunno. Leaning toward not really digging them. Kinda rocker-dude stuff without actually rocking in any original way. From Atlanta.)

MP3: Marmoset-Run Away, Teri
MP3: Marmoset-Peach Cobbler
(New tracks from Marmoset that I’ve been playing over and over. Proving again that I still heave the heart of a wimpy indie boy. From new album Tea Tornado released today.)